Last week “Roe Shadow”, the second YXT 24 Evolution by Lynx Yachts, was handed over in the Netherlands to her experienced and passionate owner, after the launch in March and the successful sea trials in a stormy North Sea. This 27.30-metre robust yet versatile yacht, which embodies all the special features of the custom support vessels built by the Dutch shipyard, will now move to the Mediterranean Sea for the summer season.

“We are very proud of this new vessel and want to express our special thanks to the whole team involved in the construction.” says Filippo Rossi, Sales & Marketing manager at Lynx Yachts “In particular, we also want to thank the owner, his representative and ACP Surveyors, for the great cooperation during the lockdown and this unprecedented period we are all facing.”

The exterior lines of Roe Shadow are designed by Bernd Weel, the naval architecture is by Diana Yacht Design and the interior design is by Darnet Design. Roe Shadow is powered with two 800 hp MAN engines for a cruising speed of 12 knots and mounts a HS-Marine knuckle boom crane with a load capacity of 4 tons at 5.5 radius, 2.65 tons at 7.5 m radius, 1.96 tons at 10.11 radius.

The 75-square–metre main deck houses a 9.80 m Pascoe beach lander with two outboard engines as well as two Sea Doo GTR 230. The external deck, including the main bridge and the beach platform, is covered with natural teak wood. Once the toys and tenders are launched, the entire area can be used as a fantastic huge terrace on the sea, for lounging, parties, barbecue and entertainment, thanks also to a 100-inch outdoor screen mounted at the stern of the wheel house.

The wheel house positioned forward allows a 360-degree view and, in particular, from the large aft window crew can also check on toys and equipment loaded onboard, during navigation. The interior layout provides, in addition to two forward double crew cabins, a large crew mess with three refrigerators and three freezers, to increase the storage of the mother ship. The laundry area is equipped with three washing machines and three dryers to extend the mother ship services.

“The owner of Roe Shadow is a true watersports lover.” concludes Rossi “Therefore, also the interior layout has been developed accordingly, to meet all his needs and wishes in the true spirit of our custom building.”

Amidships there are two large cabins: the starboard side one is for the storage of sports equipment, such as wetsuits, kite sails, jackets and similar, while the portside cabin is equipped for washing the sports gear and accessories used during water sports. Kite boards, scuba dive equipment, surfboards and SUPs as well as inflatable water games and toys are stored in the surf locker inside the lazarette, which has direct access to the beach platform through the large stern hatch. The lazarette also hosts a day head featuring also a
practical large shower.

In the meantime in Nijkerk, the construction of the Crossover 27, sold last March and due for delivery in 2022, continues at full speed and the shipyard has confirmed its participation in the next Cannes Yachting Festival from 8th to 13th September 2020. 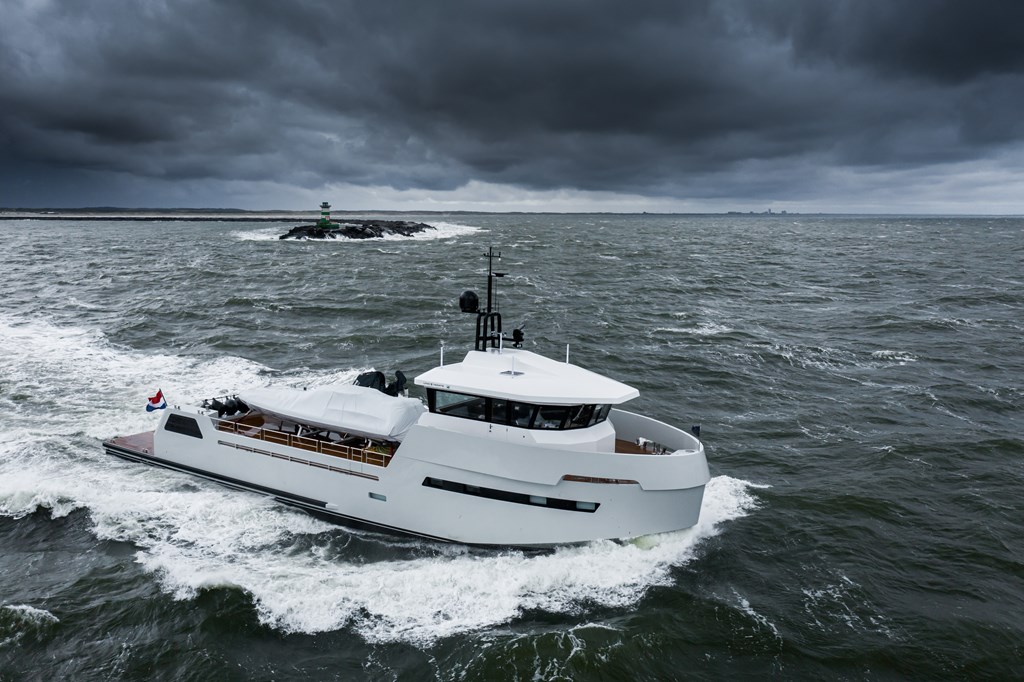