– The Videoworks technicians have installed customised audio/video, domotics, entertainment, lighting and network systems in many of the season’s most important yachts

-Depending on the yacht’s layout, Videoworks has opted for local or centralised racks, in order to guarantee full comfort aboard

Videoworks Group confirms its role as a leader in AV and IT integrations in the world of yachting, with its systems installed in some of this season’s most eagerly awaited superyachts. The use of audio/video systems, domotics and an on-board network are now among the main requests made by Owners and their guests. Looking at a soccer match on a large screen with very high resolution, listening to excellent music with loudspeakers that faithfully reproduce pure sounds, giving a party on board, managing lights, blinds, multimedia contents and air conditioning and browsing the internet in a secure and reliable manner are now musthaves of system integration.

Videoworks has developed the on-board systems of vessels such as the 80-metre Columbus Classic M/Y Dragon megayacht, the new Benetti FB272 and FB277 giga yachts and the Sunseeker 116, as well as the first 50-metre Riva Yachts M/Y Race, the 79-metre CRN 135 and the 140’ by Pershing. Starting from the Owners’ various requests, Videoworks technicians opted for centralised or local racks. They then worked on making the system easy for the Owners and their guests to use, thanks to dedicated interfaces that can be managed on iPads. Systems such as these are installed on the new 55-metre yacht by Baglietto and the 31-metre yacht by Cerri. 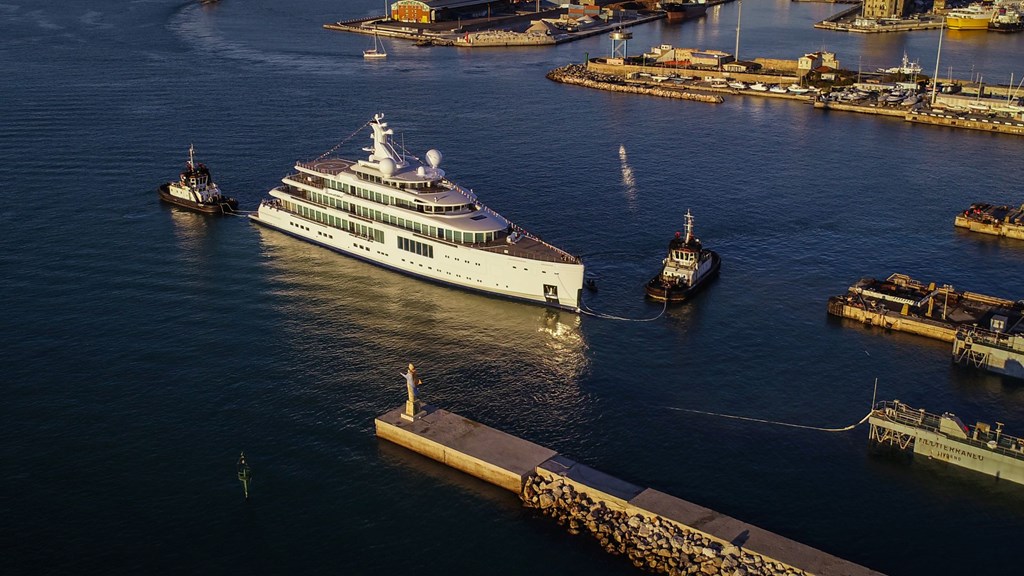 A selection of some new 2019 Yachts with audio/video, domotics, entertainment, lighting and network systems created by Videoworks

COLUMBUS CLASSIC M/Y DRAGON. On the 80-metre yacht by Columbus Yachts (part of the Palumbo Superyachts group), Videoworks has designed the AV, SAT and domotics systems. There is a local rack with the AV electronics in every hall. The integrated AV system is managed by a Crestron CPU. The Videoworks interface for iPad makes it as simple as possible for the Owner to use. Cinema lovers will be able to make full use of the VOD Kaleidescape system for the storage and reproduction of UHD contents. 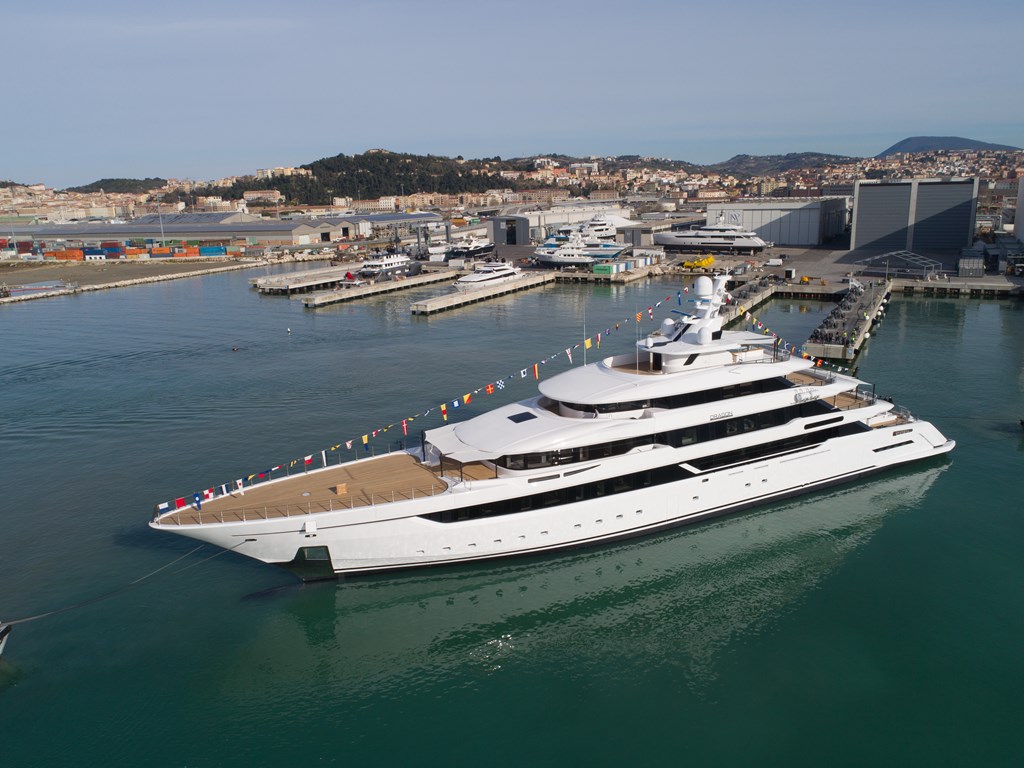 RIVA SYD01 M/Y RACE. The 50-metre yacht that inaugurates the SuperYachtsDivision of Riva Yachts holds super-concentrated technology: Videoworks has designed the AV, IT, TV/Sat, CCTV, IP telephony and domotics systems. The AV-IT system was designed according to the philosophy of a distributed system – every cabin/hall has a local rack containing the AV electronics. The audio system in the internal and external premium areas has the James Loudspeaker marine speakers. IP telephony is based on a Panasonic switchboard with fixed and cordless terminals. Thanks to its considerable experience and long-term partnership with LUTRON (a world leading company in the production of light control systems), Videoworks has designed and built the on-board domotics, i.e. the intelligent control of lights and blinds in the guest area, which makes time on board even more comfortable and pleasant. The CCTV system is made up entirely of professional PANASONIC products. It includes 5 high

resolution IP cameras and a network recorder for recording video flows and archiving them in encrypted form.

CRN 135 – 79m. Super-quality sounds and images, comfort and top security of the internet connection: these are the pillars of the system that Videoworks designed and built with the contribution of the CRN technical office and with the Owners’ Team. Starting from a cabling infrastructure designed to support technological development in the next ten years, Videoworks installed OLED 4K display screens, centralised multimedia digital libraries, premium speakers, invisible speakers on the external decks, latest-generation Wi-Fi, VSAT and LTE-A connection and state-of-the-art IT security systems, which, among other things, also make remote assistance operations easy to carry out. An integrated Lutron system allows to manage all the lighting facilities on board. To ensure the systems are very easy for the Owner and guests to use, the systems can be managed through a simple interface that can be installed on iPads and iPhones.

PERSHING 140 PHG01. On this 140’ superyacht, Videoworks has designed the AV, IT, TV/SAT, IP telephony and domotics control systems. All the main electronics are installed in just three rack cabinets with 41 units, which reduces to a minimum the devices installed in the cabins and in the common areas. The audio system in the internal and external common areas has marine speakers made by James Loudspeaker, a leader in the world market for quality and reliability. These speakers guarantee a clear, powerful sound. Cinema lovers on the sun deck will be able to enjoy high-definition projections on a removable 120’’ screen. The IT infrastructure (cabled and Wi-Fi) is made entirely with CISCO Hardware, a world leader in terms of reliability and performance. IP telephony is based on a Panasonic switchboard with fixed and cordless terminals. The Videoworks interface for iPad makes controlling the Audio and Video systems easy and intuitive. The Crestron CPU interfaces with the lighting, blind and HVAC systems of third parties to make the domotics controllable via iPad. 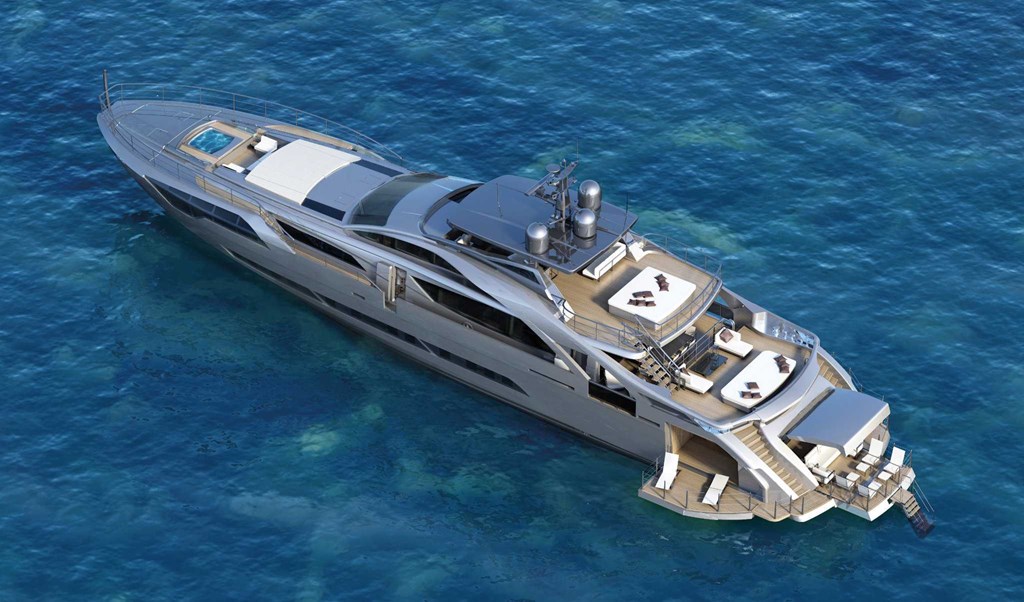 BAGLIETTO C10225. This 55-metre superyacht has advanced technology and high quality AV IT and CCTV systems designed by Videoworks. The main electronics are housed in just three rack cabinets with 42 units (approximately 2 metres in height). The Cinema Hall on the upper deck has a 90’’ screen and a SONY 4K projector. Both these items can be automatically moved and fold perfectly back into the ceiling cover. The beach area has a Ledwall approximately 6 square metres in size, with 4K resolution made of LG display screens. It can be used to view video and scene contents as well as films and TV programmes. Lastly, the CCTV system is made up entirely of professional PANASONIC products. It includes eight highresolution IP cameras, two control stations with ASM200 Panasonic software and a network recorder for recording video flows and archiving them in encrypted form.

CERRI 3101. Hight technology solutions characterise the systems that Videoworks has studied for this new 31metre yacht. The AV-IT system was designed according to the philosophy of a distributed system – every cabin/hall has a local rack containing the AV electronics. The IT infrastructure (cabled and Wi-Fi) is made entirely with CISCO Hardware, a world leader in terms of reliability and performance. The AV integrated system is managed through a Crestron CPU. The Videoworks interface for iPad allows to easily control the Audio and Video systems.