From the original idea by Chris Bangle to its completion. Gently and silently, the SL102 Asymmetric overturns tradition in favour of comfort and an even greater emphasis on a relationship with the sea.

SL102 Asymmetric is inspired by the desire to dare. The Sanlorenzo yard has challenged the habits, methods, style and traditions that dominate yacht building with an entirely new design. The innovation lies in the exterior layout, which now serves the requirements of the interiors, rendering them more spacious and comfortable with a more intense relationship with the sea. A small revolution in a world like the yacht industry that is so tightly bound to tradition. It’s also a discreet, silent revolution, deliberately and very skilfully camouflaged.

What we’re talking about is asymmetry. We are used to seeing yacht exteriors with a symmetrical configuration, with two identical side walkways – one starboard, one port – connecting the bows with the stern. On the SL102 Asymmetric, though, the main deck corridor remains as tradition dictates, but the port walkway has disappeared so the yacht takes on a wide-body shape, with the sides continuing uninterrupted to the flybridge. If it hadn’t been concealed, this choice would have overturned every convention, starting with San Lorenzo’s family feeling.

This is where the designers’ abilities came into play, as they have succeeded in camouflaging it with a balanced play of light and dark, with signs and elements that repeat along both sides to create a visual symmetry.
Many people were involved in this project. Chris Bangle set the ball rolling “by confronting the problem of why yachts had to be the same on both sides, and he asked himself whether it were possible to create a preferential walkway on one side and use the other to optimise the distributive functional elements”, says Bernardo Zuccon of Zuccon International Project, the studio that handled both interior and exterior design, and which was given the task of taking Bangle’s idea and making it real.

The space that has gained most from this solution is the main deck saloon. Its interiors have been remodelled and now they feature new transparent sections, flooding the interiors with light. As well as gaining a dozen square metres of space, the asymmetry of the exteriors makes them even more similar to the lounge of a land-based villa, with a sea terrace on one side (the starboard bulwark opens into a terrace) and on the other a full-height window looking out onto the sea. In order to maximise the panoramic impact and eliminate every visual obstacle, one section of the wall lowers electrically so that passengers seem to be perched high above the surface of the sea.

The relationship between exterior and interior is interpreted in a way that provides a smooth fluidity and coherence between the two worlds, a result achieved through careful selection of materials combined with solutions aiming to eliminate, or at least minimise, the transition, like the glass walls creating a play of dividing/not dividing the lounge and exterior stairway up to the sun deck, where the steps are a natural extension of the shelves in the interior bookcase.

The colours feature a range of light, soft natural tones that provide a perfect complement to the marine environment – the dark leather finishes coordinate with the warm tones of the Burmese teak flooring and the furnishings, chosen by the owner from Made in Italy brands, in a linear, contemporary style with some 1960s and 70s exceptions like the Taccia lamp by Castiglioni for Flos in the lounge and the original 1970s chaise longue in the owner’s cabin on the main deck. 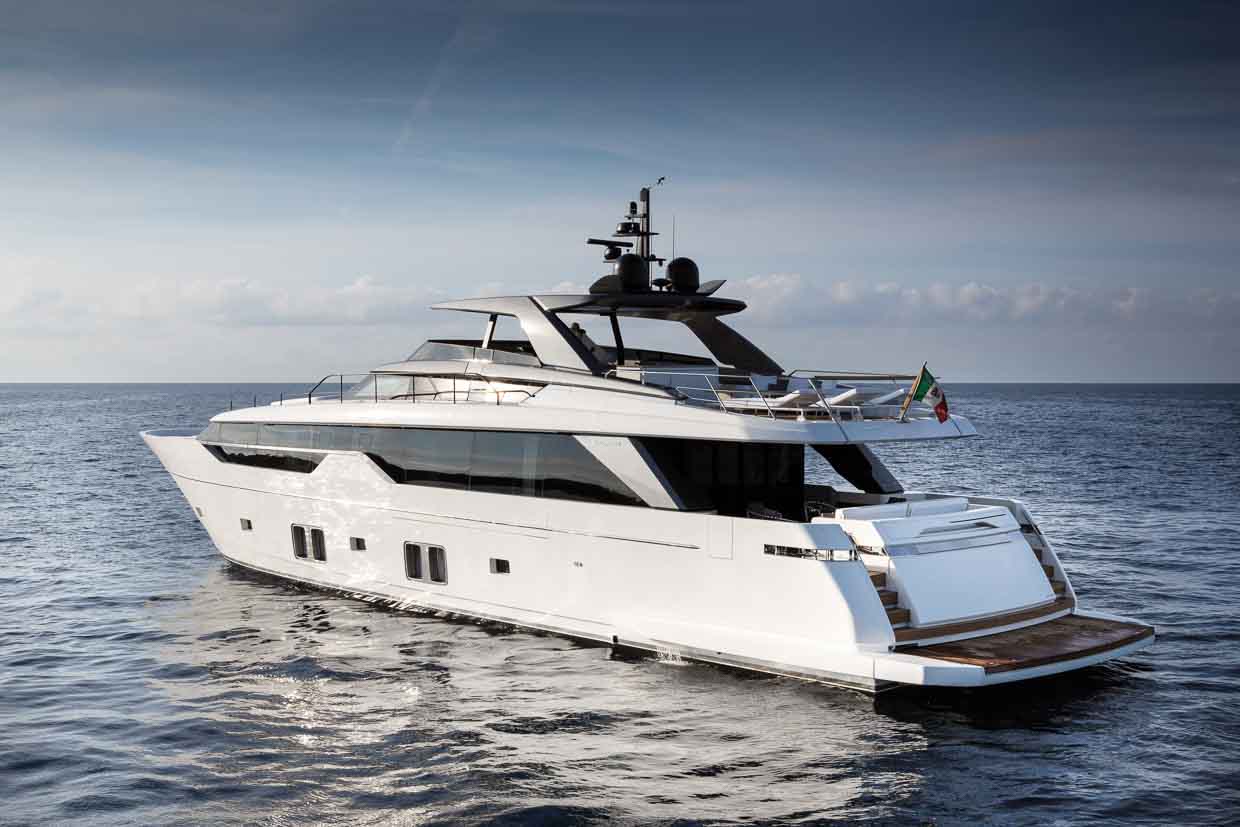 When I became involved in the design of the SL102 Asymmetric, the yard was already thinking of developing this asymmetrical design project. My job was to transfer this concept inside a container that spoke the same language as the yard, without disrupting the Sanlorenzo image, as the yard has played an important role in the history of Italian yacht building. The yard had the idea and asked me to devise a solution that would transform it into reality, and we succeeded.

The biggest challenge was to understand that asymmetry could lead to new flow patterns that would alter the classic balance, leaving room for new configurations and the development of an original “habitative type” where the novel interpretation of spaces would create a different way of experiencing on-board life.
The result is an exterior design that’s daring, respectful and (I’m being deliberately provocative here) symmetrical!

I can’t really say I have a favourite area on board, but thanks to the asymmetrical structure and consequent redistribution of the spaces, the day area has undergone a striking transformation, offering new possibilities for on-board life and the opportunity to experience a different emotional relationship with the sea.

The market has responded favourably to the project, and the synergy with the yard is intensifying. For the future, the yard’s input is clear – to continue the design initiative that began with the experience of the SL102 Asymmetric (the SL96 Asymmetric is due in 2020) with the aim of retaining the stylistic features and languages that distinguished the first product, and that will be reworked and shaped to give this new project the identity needed to offer power and credibility to the choices in the range. In short, consolidating an idea, enriching and nurturing the initiative with new content, backed by a successful experience.

Not only does the asymmetry increase the available area inside the yacht, it also provides the opportunity to enter into a relationship with the sea from a number of points of view. When we board the yacht and stand on the axis of symmetry, we have a visual and physical relationship with the sea that remains largely the same whether we look left or right. With an asymmetrical design, though, we can enjoy two different visual experiences – on the right, a sliding door provides access from the lounge to the classic walkaround running around the exterior from bow to stern, while to the left, through a section of the bulwark that can be lowered, we can have this huge, full-height glazed area in direct contact with the sea. This generates the sensation of “touching” the water while remaining inside. The SL102 Asymmetric is a daring yacht with a strong personality. She’s extremely flexible, as there are few fixed architectural elements. A further distinctive feature is the continuity between the exterior and interior spaces, made possible by using the same type of wooden flooring, and the absence of steps and barriers between the two areas.

The spaces have been designed in response to the owner’s wish to experience the same feeling on board as in his home – the carpeting, for example, is a clear reference to the typical domestic living space. The most frequently used carpets have a natural look and finish that goes well with the maritime environment, but there are some examples where the carpet becomes one of the elements that provide a particular splash of vivid, more vibrant colour, leaving the main structure of the furnishings clad with more neutral furnishings.

As in a photograph, light plays a strategic role for an architect, giving depth to the interiors, highlighting shapes and colour contrasts. Light is an emotive element on board the SL102 Asymmetric.

The idea of constructing an asymmetrical yacht was inspired by a precise design idea that’s in the yard’s DNA, as well as its intrinsic ability to introduce innovative, revolutionary elements. It’s totally unprecedented and pushes our work beyond current horizons, expanding the possibilities of nautical design.

The development of the project involved a number of creative minds. From an original idea by Chris Bangle, the car design genius who recently collaborated with the yard, to the yard’s own technicians and designers, including Bernardo Zuccon, the young naval architect who with his sister Martina is providing ideas and professional skills for the sector through the Zuccon International Project studio.

The asymmetry has made it possible, in comparison to a traditional layout, to gain more space and light, relaxation and greater flexibility. Another important characteristic involves the fact that the asymmetry is camouflaged rather than emphasised. The sober lines, equilibrium of masses, the measured openings on the hull and sleek, restrained superstructure – all the brand’s stylistic elements and family features are harmoniously applied to the new SL102 Asymmetric.
The real challenge was to innovate without compromising the history and traditions of the Sanlorenzo yard, while respecting the strong image of the brand and its yachts – innovation without losing identity.

This yacht can be described by three adjectives: innovative, sophisticated and practical. The SL102 Asymmetric is a yacht for owners who see on-board life as a priority and want direct, constant contact with the sea, which in the end is the real reason for owning and sailing a yacht. 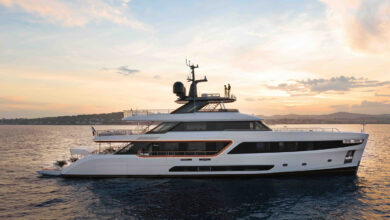 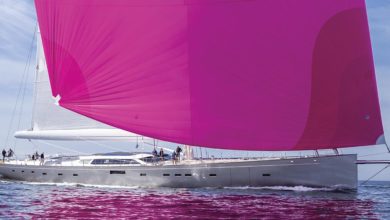 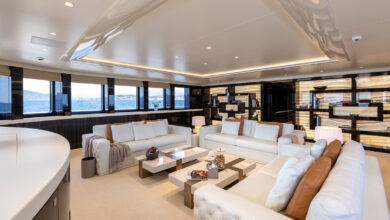 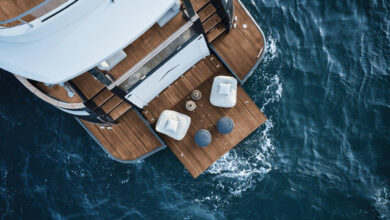