Atlantico is the latest creation by architect and yacht designer Stefano Pastrovich. Supporting the mother ship 55m Atlante, the boat is 27.4m in length overall with a beam of 10.2m when the fold-down side terraces in the stern are deployed. The common thread throughout the yacht is a rational aesthetic with large open-plan spaces designed to be beautiful, liveable, versatile and functional.

The 47-year-old Italian architect based in the Principality of Monaco is already well known for the strong architectural influence and aesthetic impact of projects such as 104m Le Grand Bleu and the 36m Wallypower. These were all projects driven by the search for new forms and concepts with the aim of pushing the boundaries of yacht design.  Atlantico is undoubtedly the result of the same mission: a “breakthrough” project that has benefitted from the rare conjunction of the yacht owner’s adventurous spirit and the designer’s unique creativity.

“Atlantico is the result of long research and development work,” says Pastrovich. ” It is the answer to the question: how can yacht design best meet the needs of modern owners?”

Pastrovich is a believer in the Mies Van Der Rohe concept that “Less is more”. The renowned German architect maintained that the most beautiful architecture is based on what is most essential, and this principle moulded the Atlantico project from the very beginning.
The essentiality of architecture is able to free the spirit of users from the cognitive bombardment of modern life. Pastrovich applied this theory to Atlantico by focusing on the elements he considered necessary to fully enjoy the onboard experience.Atlantico’s main deck measures 27x8m for a total area of 145 sqm. In this space there is no fixed furniture, except for the helm console and the pilot’s seats. All the sofas and tables are fixed to the deck by easily removable pins.

“We think that designing a deck without fixed furniture helps to free the mind and give space to the personal creativity of the owner,” says Pastrovich. “Drawing on the essential is a bit like drawing silence or emptiness. It is a work of surgical difficulty, because it requires great concentration to abstract the mind from daily reality of information overload.” 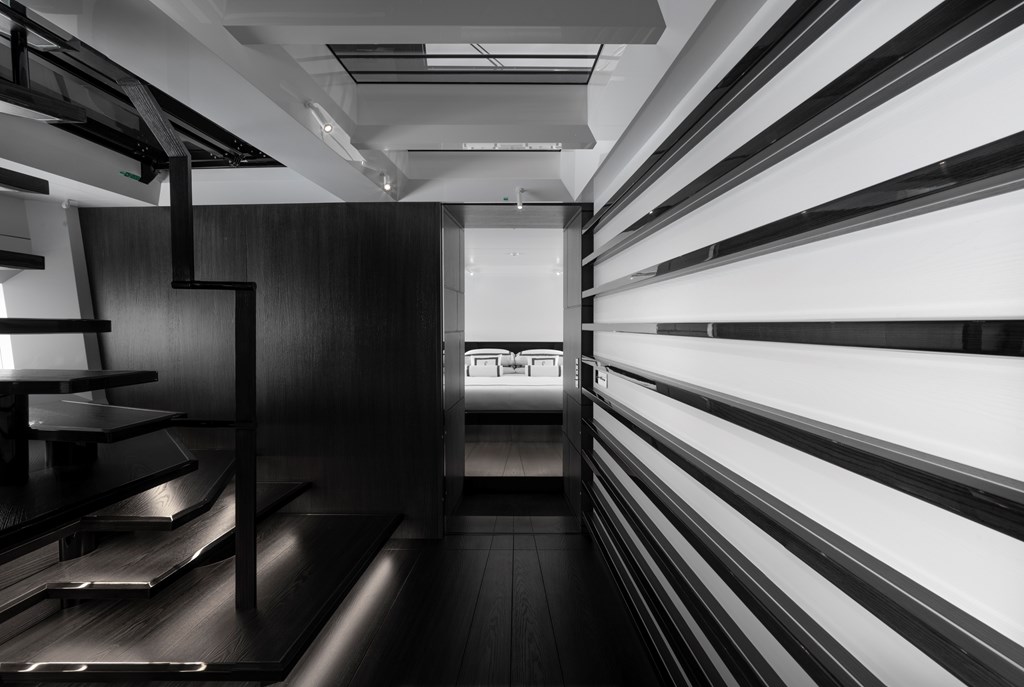 THE CONTINUITY OF SPACE

One of the most significant architectural motifs of the project is the continuity between interior and exterior: a feature that is already a hallmark of Pastrovich, but which is even more pronounced aboard Atlantico.

This sense of continuity is not only highlighted by the uninterrupted teak decking from bow to stern that seems to ignore the presence of the deckhouse, but also the abruptly vertical lines of the aft section of the deckhouse, designed without an aft door to provide free circulation fore and aft and diminish the perception of being inside or outside.

Creating a covered space that is perceived as an external space was decisive for the entire architectural concept and is highlighted by  the static design of the roof, the supporting pillars and the side windows.

“We have overturned the concept of perimeter roof supports by introducing the interior ‘pilotis’ – columns or pillars – developed by Le Corbusier in the 1930s,” says Pastrovich. “In fact, the roof loads are supported on these pillars, which means we were able to lighten the glass perimeter structure and increase the visibility outboard.”

The pillars are a symbol of generational change insofar as they do away with the traditional facade design of windows perforating the sides, and replace them with curtain wall windows as used in land-based architecture.

AS WIDE AS A LOFT

Pastrovich developed the interior design by extending the architectural continuity between exterior and interior below deck and creating a lounge that can be transformed into two large cabins.

“We wanted to recreate the freedom offered by a residential loft apartment, where the owner can give space to his own creativity by choosing to change the layout or modifying the decor and function.”

Like the exterior, the interior environment has been stripped of superfluous elements. The doors are hidden in the walls when not in use and the structural pillars on the upper deck continue down to the floor, the ceiling design enhances the geometry of the pillars, and the beds and sofas are removable to be able to change them over time.

Pastrovich Studio’s experience in the conversion of supply vessels over the last decade has brought awareness of the advantages of wider hulls in the design of the layout.

“Over the years we have experimented with different layouts and realised that the future is with shorter and wider yachts that bring advantages in terms of both layout management and manoeuvrability.”

Atlantico’s hull was designed to integrate the studio’s technical knowledge with different hull geometries, as seen in the double hull chine, the flared stern and the distinctive shape of the bow. The result is an unusually wide hull from bow to stern, which provides unique volumes for a yacht of its size with room for a tender under the foredeck.

A conventional yacht of 27m LOA would normally have a maximum beam of about 7m. Atlantico, on the other hand, has a beam 8.3m on deck. And when the side platforms are deployed these increases to 10.2m.

Combined with a top speed of 28 knots, these features make the Atlantico “chase boat” particularly suitable for fast transfers between islands and to explore remote bays, while providing comfortable and airy spaces to enjoy life at sea to the max.

Atlantico is a unique vessel in a number of ways. Firstly, it offers a maximum beam of 8.3m – equal to that of a 40m yacht – while maintaining the performance of a 27m boat.

The structural interior pillars and very large glazed surfaces provide the basis of a new architecture that allows the interior and exterior to function as a continuum.
“To highlight the importance of the pillars, we designed them as an integral part of the overall aesthetics in an Art Deco style,” explains the designer Stefano Pastrovich.

Atlantico’s hull reflects the technical knowledge acquired over many years by the Pastrovich Studio and combines various geometries, from  the double hull chine to the flaired stern and distinctive shape of the bow.

The deckhouse roof comprises a fixed structure in the middle for the mast and two transparent sliding panels, whose dimensions are based on the maximum size of plexiglass panes that are commercially available. This simple yet highly effective design eliminates the need for secondary structures, thereby flooding the interior with the maximum amount of natural light. 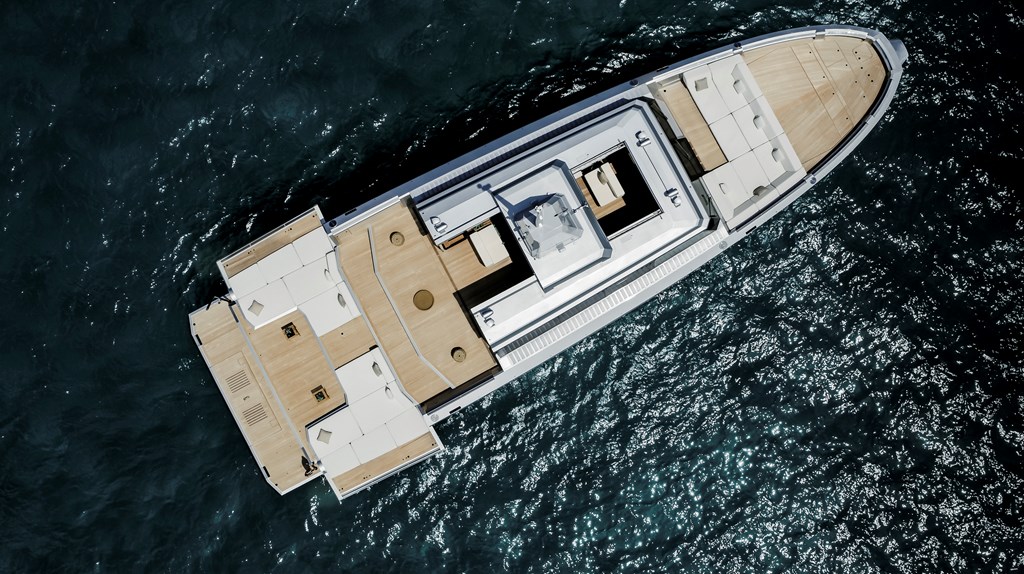 A pantograph door that is 1.5m wide – comparable in size to those on a 50-metre yacht – provides direct access to the forward cockpit and sunbathing area as well as a continuous sightline from bow to stern.

The aft deck is terraced down to the stern platform to serve as an open beach club on the sea, allowing the owner and his guests to place cushions on different levels but still be in contact with the rest of the company. The stern area opens and closes like a piece of origami. The side bulwarks provide great protection while under way, but can open up to extend the deck area while at anchor. The stern platform is strategically positioned 1.5m above sea level to avoid the common problem of waves flooding the deck, perhaps when a boat comes off the plane nearby. Instead, a transformer-style platform with steps can be lowered into the water for comfortable access to the sea.


The interior staircase that descends below deck is a design highlight. The steps vary in width from 0.7m to 1.2m and are accessed via a huge glass companion hatch that can be raised on bellows to become a skylight that illuminates the owner’s area. The staircase architecture further reinforces the horizontal battens on the wall that lead the observer aft to the owner’s lounge that can be converted into two cabins.