Amsterdam, October 2020 – The formerly “classic” Feadship motor yacht Broadwater has been re-delivered by Huisfit and left the facilities of Royal Huisman Amsterdam for her Atlantic crossing after an extensive and successful conversion of her interior and exterior.

Huisfit – Royal Huisman’s dedicated division for refit, rebuild and renewal – was commissioned to undertake this major project following an earlier visit to the shipyard in 2019. The scope of work ranged from various upgrades to comfort and esthetic aspects of the yacht (inside and out), to changes relating to classification requirements based on the Owner’s brief, which was  to convert Broadwater into a “modern and livable home away from home” with charter capability.


The new exterior and interior styling has been created by the talented yacht designer Adam Voorhees, who was inspired by the Owner’s input to define an abundance of desirable modifications. MCM Newport’s Peter Wilson assisted Broadwater’s experienced Owner with the selection of the refit shipyard and oversaw the conversion project at the Huisfit facilities at Royal Huisman Amsterdam.


The most impressive aspect accomplished during the 2019 – 2020 Huisfit Broadwater project is the 4m / 13ft extension of the hull, which not only creates a considerably more spacious arrangement, but also transformed the yacht’s exterior appearance. The original classic transom was skillfully removed and replaced with a re-styled stern, fashioning a delightful aft deck and beach club. To complement the new configuration, the hull and superstructure have been painted in a contemporary color scheme.

The sundeck is right on trend with a new and larger hot tub, a pleasant bar area and the added benefit of a day head which was not there before.

BROADWATER’S NEW COMPOSITE SUN AWNING HARDTOP AND RADARMAST HAS BEEN DELIVERED BY RONDAL AS A TURN-KEY PROJECT.

The original arch and antenna mast were replaced with a new composite sun awning hardtop, made by Rondal, Royal Huisman’s sister company. New teak and furniture enhance the main and bridge deck perfectly. 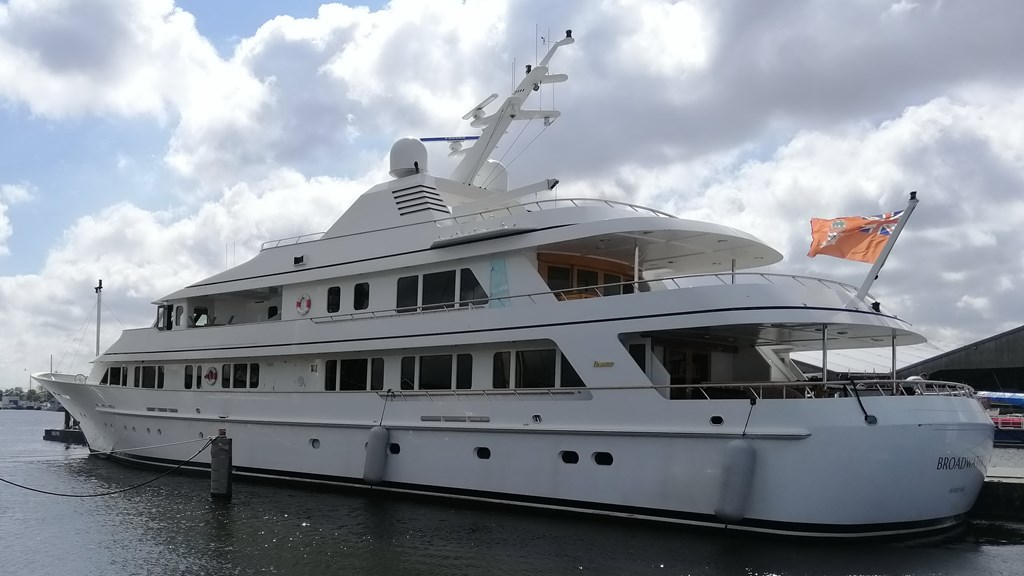 ALL BRIDGE AND MAIN DECK PLANKING IS PRE-ASSEMBLED AT THE ROYAL HUISMAN WORKSHOP FOR EFFICIENT PREPARATIONS AND INSTALLATION ON DECK IN A SUBSEQUENT STAGE.

Inside, the Owner’s and guest areas have been completely restyled, from a classic scheme with dark joinery, to a much more contemporary elegance, using attractive new materials. The crew area has been updated as well, and throughout, the motoryacht enjoys a complete upgrade of the audio / video system and the replacement of the navigation / communication electronics.


The Owner’s requirement for charter capability necessitated a classification change from “private use” to “commercial use”. During the Huisfit conversion, this involved intense cooperation between the shipyard, the Flag state and Classification society, to develop workable solutions and meet modern standards. After all, the yacht was built a quarter of a century ago, before any Large Yacht Code even existed. Various modifications include construction work to the fire boundaries, and the installation of additional board systems such as a large emergency generator and a water mist fire-fighting system.

Owner’s representative Peter Wilson of MCM Newport comments: “When I was first contacted by the Owner to discuss this refit, it quickly became apparent that this was an irresistible project. His vision was to breathe new life into this magnificent Feadship. It was a great pleasure to work alongside Adam Voorhees to see his designs evolve through the development of both the exterior and interior.

The outcome is the result of the dedication and skill of all the boatbuilding disciplines involved to affect such a brilliant transformation. The fine pedigree of this yacht has been respected and dare I say enhanced. I have little doubt that Broadwater’s new profile, interior and myriad behind the scenes modifications and improvements, will stand her in good stead for her next quarter century and for all those fortunate enough to go on board.”

Jan Timmerman, CEO Royal Huisman comments: “Our shipyard  has an established track record of success with superyacht rebuilds and conversions. The Huisfit process brings together our infrastructure, technology and renowned skills, as well as leading industry specialists to provide a bespoke solution in a competitively tailored package.

On behalf of our team I can say that we are proud of the successful delivery of Broadwater. This is a very significant milestone for Huisfit and the result of great teamwork between the Owner, Peter Wilson, the Broadwater crew, various partners and the Huisfit team – despite the various challenges like working in Covid-19 times. Thanks to her visionary Owner, Broadwater will be future-proof for many years ahead.”

An extensive photoshoot of Broadwater in stunning surroundings is planned to take place later this year, so a full presentation of the final results of the modifications and her design updates during the recent Huisfit conversion can be expected in the near future.