Arcadia Yachts has successfully launched its second SHERPA XL, a perfect example of one of the shipyard’s characteristic elements, such as closed volumes in the bow that allow the Owner and guests to enjoy convertible spaces in the stern. In this way, and unlike many other yachts with a traditional layout that feature numerous, small, separate areas, ARCADIA achieves a single area in which the various functions are always connected to one another, to ensure full guest conviviality.

“We didn’t rest on our laurels after the success of the first SHERPA XL,” says Ugo Pellegrino, Sole Director of the Italian shipyard. “We listened to the suggestions of our Owners and decided to work on various details, to make this new unit the perfect example of how ARCADIA can always look forward. This work led to the creation of a yacht that is perfect not just for Owners who want to use it for day cruising with all the guests they desire but also for people who want to experience a long cruise with very high levels of service, embracing the ‘slow yachting’ philosophy that ARCADIA itself introduced ten years ago.”

NUMEROUS DETAILS ADD TO A WINNING PROJECT
The bow decks are split, so a central staircase with reduced height differences can be developed. This particular pattern of intersections, which achieves large spaces with limited height, has created a far more streamlined profile that is coherent with the performance of the SHERPA XL that, in its two IPS 1350 engine version can exceed a maximum speed of 23 knots. Its consumption levels, approximately 6.5 l/nm at 12kn, are almost 30% lower compared to other yachts in the 85-90 feet segment. The estimated range is over 1,000 miles at 12 knots, rising to over 1,400 at a speed of 10 knots.

The large open spaces, typical of every ARCADIA model, stand out on this 24m yacht, where the full-height windows, the “open” and designer elements inserted in the topsides and the innovative glass panels that can be raised and lowered like the side windows in a car, create spaces in which the threshold between inside and outside becomes imperceptible, while closed spaces dissolve and are absorbed by the surrounding natural environment.

But the newest in the ARCADIA YACHTS family has other significant innovative elements. With the Milan-based Hot Lab design firm, the shipyard decided to develop a new layout for the galley and worked on the ergonomics of the crew area, on the materials and the essences.

The 7m beam of the ARCADIA SHERPA XL’s hull provides considerable opportunities for the layout, which can be adjusted to meet the needs of different Owners. In this second unit, the shipyard opted for a closed galley which, however, does not make the jardin d’hiver any less comfortable.

The galley’s entry is to the side to emphasize its discretion in the skylounge, but it can still serve the aft deck and the sunlounge at the same time quickly and easily. The internal spaces in the galley have been arranged differently. In its almost 5 square metres, it can fit a two-door refrigerator (approximately 1 metre in width), a hob with integrated hood, a traditional oven and large storage space on two levels. A hatch in the roof guarantees effective and quick ventilation.

THE PRESENCE OF TRANSPARENT ELEMENTS
The “trait d’union” between interiors and exteriors, which highlights the relationship with the sea and the surrounding environment, is definitely the skylounge, where a simple touch on the button of the up&down windows lets the sea breeze enter – the best air conditioning anyone could wish for.

“The use of the ‘glass’ element is not limited just to the windows. It becomes an integral part of the interiors,” explains Enrico Lumini, Hot Lab’s Head of Design. “The idea was to stress the different functions of the skylounge by inserting materials that did not obstruct the view. Take for example the glass walls that separate the jardin d’hiver from the wheelhouse: the depth of the visual field does not change, yet the flows of the crew and passengers can be separated when and if necessary.”  The presence of blinding systems guarantees a further level of privacy.

The new skylounge on the SHERPA XL has been further valorised by the selection of new materials. The parquet’s colonial essence oak and the Light Grey Alpi chosen for the furniture are ideal to increase the perception of space aboard. This perception is already guaranteed by the natural light filtering through the technological jardin d’hiver, whose roof houses the solar panels, a feature shared by all ARCADIA models. Their presence allow to reduce generators use, so the sounds of nature can be better appreciated when at anchor. The extensive use of cutting-edge glass panels with considerable thermal insulation is further proof of the shipyard’s commitment to adhere to its environmental principles.

“Even when choosing the partitions and the furniture, we opted for reflecting materials,” continues Lumini. “The contrast between shiny and matte surfaces means the partitions are not perceived as closing elements, they feel more like ‘transparent portals’. A perfect example is the wall between the lounge area and the staircase that connects all the decks. We treated it as an external sunshade wall, with the base made of reflective, shiny, nickel-coated material that stretches upwards as vertical rods of the same essence. This feature further increases the spaciousness of the living room.”

On the lower deck, the master cabin merges seamlessly with the bathroom. There are no partitions, so Owners can enjoy a space with a domestic touch – large, open and full of light, partly thanks to panoramic windows that extend down to the water line. The VIP cabin in the bow follows the same principle, successfully broadening spatial perception in an almost theatrical manner. There are also two guest cabins with twin beds, each with their own bathroom.

In the crew area there is a separate shower. Storage space can be found in cupboards, compartments under the bunks and under the liftable staircase. Direct access to the helm station makes the service far more flexible, ensuring the Owner and guests can enjoy full privacy. The shipyard has also created a third cabin (optional) designed for the possible presence of a hostess.

Direct contact with the sea and the surrounding environment, which has always been one the distinguishing traits of the ARCADIA philosophy, is an integral part of this second SHERPA XL and is particularly obvious in the cockpit. This area is directly connected to the stern platform by a short scenic sequence of steps, which gracefully interlock between the narrow topsides and the low volume that supports the sundeck. Sheltered by the sunlounge and by sliding glass doors, this is nothing less than a patio overlooking the sea, with a dining area large enough for ten people. With two wine coolers and plenty of storage space, it has everything needed to enjoy moments of total relaxation.

Another distinguishing feature of the SHERPA XL is a side garage forward of the engine room that is large enough to house a tender of 4 metres in length. This means the platform can be used by the guests as soon as the yacht is at anchor, which is a considerable advantage in terms of elegance and comfort compared to the currently available items in the 85-90 feet segment. The transversal garage also acts as sound insulation between the engine room and the master cabin.

On the upper deck, the large sunlounge with bar area stresses the open-air philosophy of the SHERPA-XL. Unlike traditional fly deck arrangements with a helm station, this area is dedicated entirely to guests and their privacy. The regular shape of the sunlounge means that possible customisation requests from customers can also be satisfied with loose furniture. 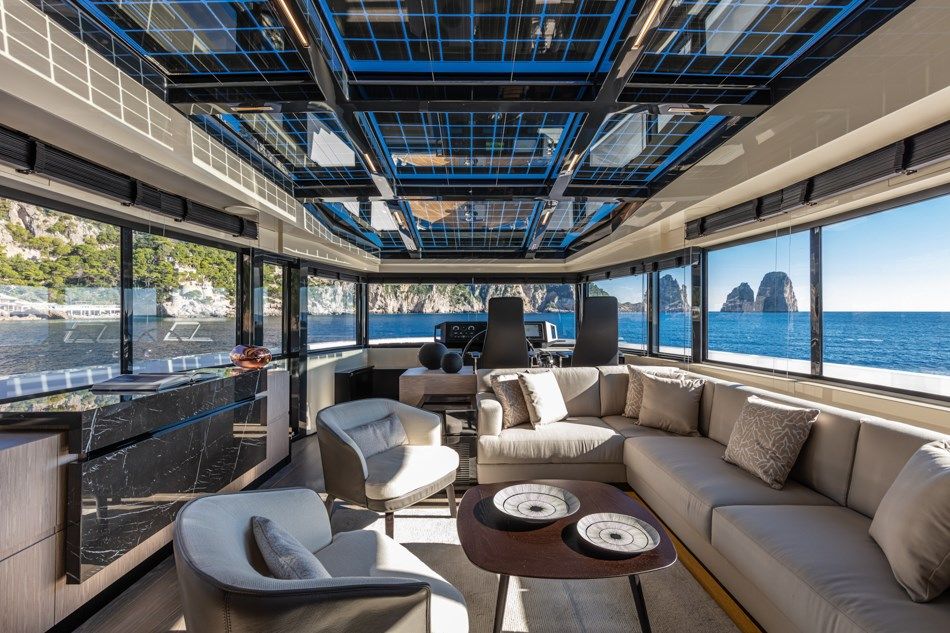