Premium Dutch motoryacht builder Van der Valk enjoyed a very successful Cannes Yachting Festival. Its newly delivered Raised Pilothouse Jangada was one of the stars of the show, as was the launch model in the revolutionary BeachClub range, which won a coveted World Yachts Trophies award in Cannes. The yard has also just received a new order for a 26-metre Raised Pilothouse and started construction on the first Modern version of its successful Flybridge range.

Jangada, the fifth superyacht in Van der Valk’s successful Raised Pilothouse custom-series line, was recently delivered to a repeat client. This 32-metre motoryacht was designed in partnership with Nick Top and Guido de Groot and features a wealth of personalised components to meet the experienced owner’s very specific brief. In fact, the client visited several other top builders and found that no other yard could offer him the same degree of customisation before opting for Van der Valk.

Jangada’s minimalistic contemporary interior style, designed together with Nick Top, is based on whitewashed European oak. The spacious galley, located in a functional area under the raised pilothouse, and the accommodations, including the crew quarters, are particularly well thought-through. Clever details include a mechanism to close off the VIP suite bathroom on the main deck for use by guests during the day after swimming without the need to pass through the bedroom, and electrically operated curved glass sliding doors between the main deck aft and the spacious saloon with its large windows.

The hull features a bulbous bow as well as a Van Oossanen Hull Vane fixed foil for enhanced fuel efficiency. A VEEM 145 zero-speed gyroscopic stabiliser keeps Jangada nice and steady even when the sea is not. And the propulsion package consists of twin MTU 12V2000 M96L engines with a capacity of 1432 kW at 2450 rpm, providing a cruising speed of 18 knots and an invigorating maximum speed of around 22 knots. 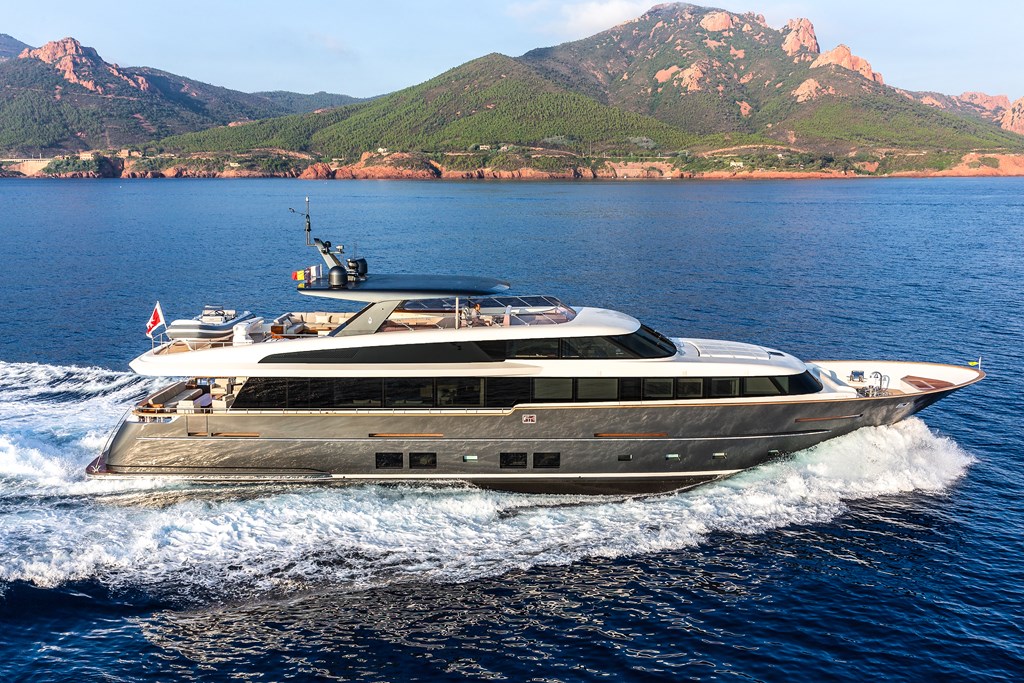 The ongoing attractions of the Raised Pilothouse range were recently emphasised by a new order measuring 26 metres. She is built for a European owner who was so impressed after meeting the Van der Valk team at last year’s Cannes Yachting Festival that he later decided to entrust the yard with this sensitive project. The hull and superstructure are due for completion this autumn and delivery is expected in the summer of 2020.

The interior of the new yacht was inspired in equal measure by the warm, sophisticated design of Van der Valk’s Grey Falcon and the clean, minimalistic appearance of Nicostasia. Built with four cabins with individual ensuite bathrooms and eight berths in all, the boat will have three crew berths and be used for sailing with the family in the Mediterranean, principally on the French Riviera. She will feature a comfy dinette for eight on the flybridge and in the main saloon.

The outdoor areas will host a helm station, a large tender and lots of sunbeds. The numerous technical tours de force will include a hydraulic swimming platform and the largest engines yet seen on a Van der Valk Raised Pilothouse 26M: twin MTU 12V 2000 M96L, 1920 hp strong and capable of producing a cruising speed of 22 knots and a very respectable top speed of 26 knots. A Seakeeper 35 gyroscope will ensure zero-speed stabilisation. 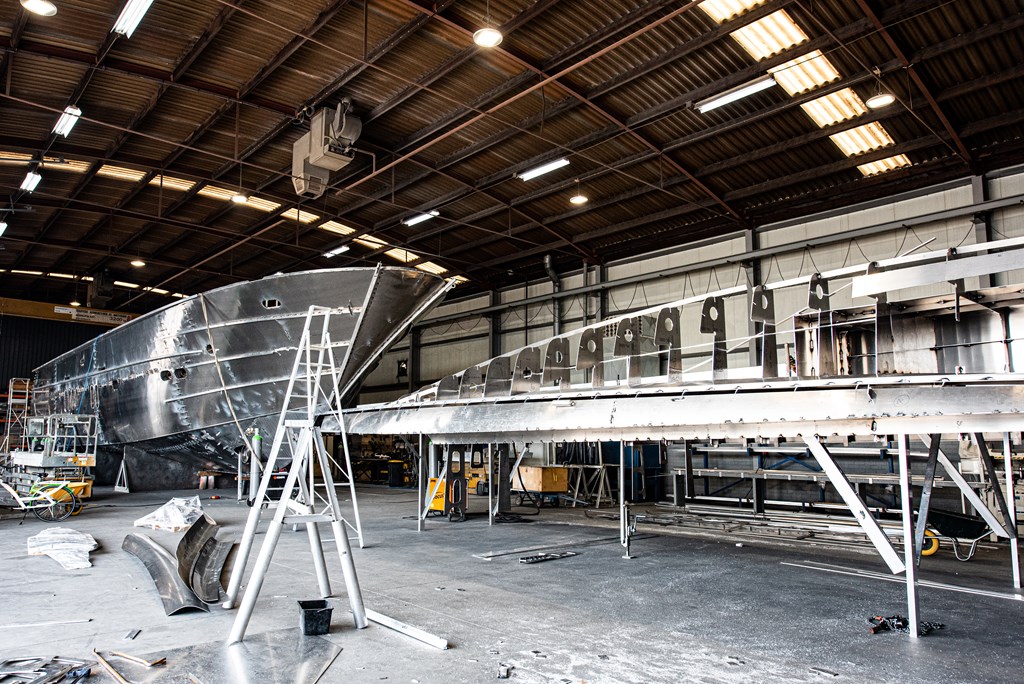 This new Raised Pilothouse is one of five yachts currently in production at Van der Valk, including a 28-metre Explorer and the third BeachClub. The craftsmen working on the latter build have been given extra inspiration after the launch model for the BeachClub range topped off a great week at the Cannes Yachting Festival in September by winning a prestigious World Yachts Trophies award. Impressed with the amount of space on her aft deck, the jury crowned the BeachClub 600 ‘Most Innovative Yacht’ in the 45ft to 64 feet category.

Construction has also just got underway at Van der Valk on an exciting 24-metre Modern version of the yard’s acclaimed Flybridge line. Designed by Cor D. Rover, the new model introduces floor-to-ceiling windows that offer sweeping vistas of the outside world. Built in aluminium and fitted with triple Volvo Penta IPS1050 engines, the yacht will make excellent use of its spacious design, with four double cabins, four bathrooms and crew quarters. There are currently 15 Flybridge models in the Van der Valk fleet and the modern Flybridge complements the options for clients with its additional ease of operation.

The last item of news currently from Van der Valk is that the yard has successfully completed and delivered a 27.45-metre project on behalf of LeVen Yachts. This custom build is now on her way to Fort Lauderdale to be exhibited at the show. 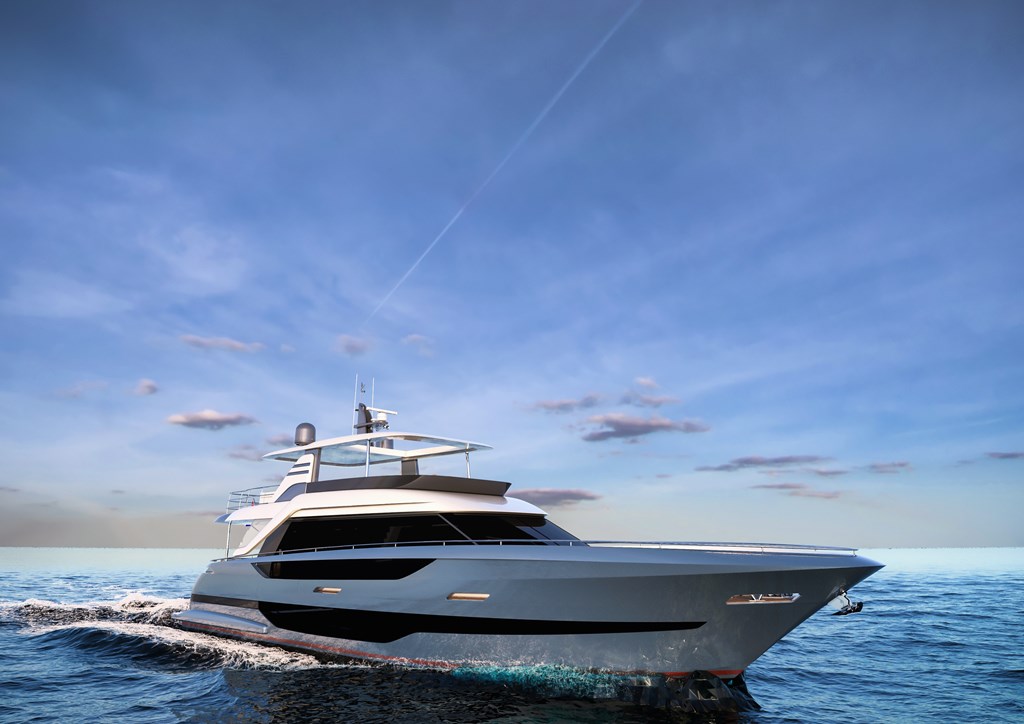