With the launch of the new ClubSwan 80, and the impressive progress of the Swan 88 – the first Swan with hybrid propulsion and the Swan 108 announced last Spring, Nautor Swan is conquering the superyacht segment with a new project: the Swan 128

The brand-new Swan 128 project announced at The Monaco Yacht Show is already taking shape at the BTC yard in Pietarsaari, where the hull plug is already completed. This exciting announcement was made on the occasion of a conference hosted by Justin Ratcliffe with a panel comprised of the resident Swan designer, Germàn Frers, Lucio Micheletti, Misa Poggi all representing the performance blue-cruiser and Juan K and Mario Pedol for the astonishing

The Swan Maxi division brings together the skills and craftsmanship founded from Nautor’s boatbuilding tradition, the innovation of new technical solutions and the ability to create custom solutions meeting the customers’ needs. This approach clearly signals an ambition to conquer the superyacht segment, offering a new approach to life onboard, with architectural and stylistic choices that really meet the needs of the owners, offering maxium comfort and luxury combined with innovative solutions always respecting the pillars of the brand DNA: Performance, Innovation, Quality and Elegance. 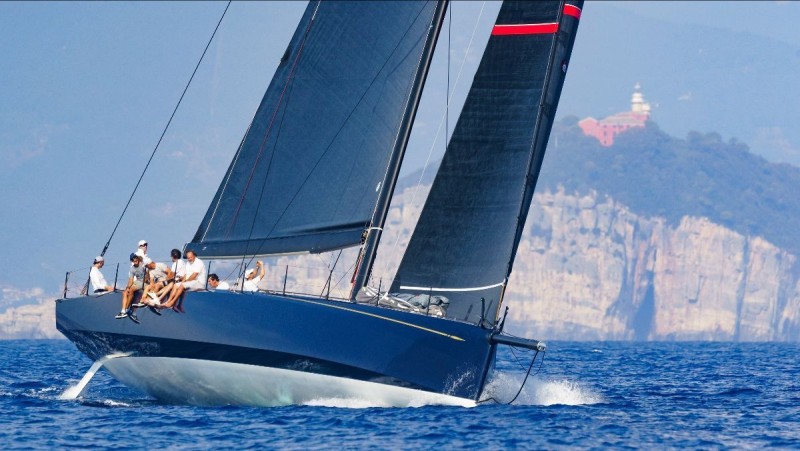 There is a new player in the world of high-performance one-design racing, and the ClubSwan 80 is set to make an immediate and profound impression on planet sailing.

Intended to be competitive at the top level of professional regatta racing the ClubSwan 80 clearly possesses the Swan racing DNA coming complete with twin rudders, canting keel, rotating canard and retractable bowsprit, while the interior offers the prospect of a ‘second life’ as a fast sports cruising yacht.

The ClubSwan 80 is a further milestone in the development of the overall Nautor Swan range and completes the ClubSwan Yachts one-design category alongside the hi-tech ClubSwan 36, the ground-breaking ClubSwan 50, and the Super Maxi ClubSwan 125.

Racing has been in Nautor Swan’s DNA since the very beginning and the brand’s thrilling regattas are the most eagerly awaited events by Swan owners.

ClubSwan has always been associated with racing, and specifically One-Design racing. The owners enjoy the competition, and the coherent, cost-effective package, both from a race programme and original investment point of view. With strict owner-driver rules, and One-Design boats, the winning formula is maintaining friendly competition with a chivalrous spirit.

The ClubSwan 80 will take full advantage of this well-established, global circuit of events, developed by ClubSwan Racing. And, in addition, the ClubSwan Racing team is developing a tailormade circuit for the new Maxi yacht.
ClubSwan 80 aims to be the simple answer to those who love racing at top level under strict OD rules and with a controlled budget. A One-Design high-performance maxi class monohull with canting keel which, with Nautor’s established world-class regatta events, gives a new meaning to the concept of owner driver racing – a truly unique sail racing experience.

Previous racing classes failed because they were based on “box rules” or handicap racing, thereby forcing owners to keep upgrading boats for the best rating – leading to no-limit budgets with a final result of a tribe of unhappy players.
ClubSwan’s goal is to bring the ClubSwan 80 class to the top international events and manage it independently throughout the year.

The Class will benefit from a relevant position at major events thanks to the quality of its performance, to the unprecedented customer support and to the absolutely innovative format. 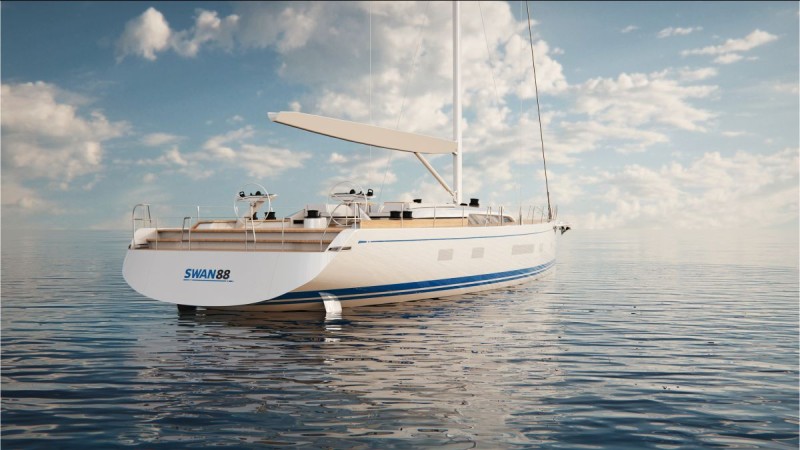 The Swan 88 and Swan 108 are based on an evolution of the brand’s previous popular yachts but with the addition of various innovative features never seen before on a Swan, like the beach area. These new models, in an advanced state of construction, see the cooperation of a team of international designers, Germàn Frers, Misa Poggi and Lucio Micheletti. The three designers together create an extraordinary design due to the experience they gained in different fields and the knowledge of the maxi world.

The Swan 88 hull number one under construction at the Boatbuilding Centre in Pietarsaari, features a diesel-electric propulsion platform, alternative to the traditional diesel-powered shaft-line, with the possibility of adding several packages at the base of the new sustainable philosophy developed by Nautor and presented at last Cannes Yachting Festival, of the “green and blue” approach.

Hull number two is in production also, with a traditional propulsion and a high performance package.
The Swan 108 hull number one will be launched next spring and conceived to cruise around the world with a customized interior by Misa Poggi.

The aims of the new design do not differ from those already envisaged for the 108, the smaller sister yacht, with extra care and attention given to certain key qualities. Firstly, performance and handling: German Frers has enriched its endless know-how with a specific CFD analysis commissioned to industry leader Cape Horn Engineering, to test and optimise the shape of the canoe body in all dynamic sailing conditions. Secondly, aesthetics: the design was carefully studied and enhanced thanks to a stimulating exchange with all the parties involved, especially in terms of the relationship between the hull and superstructure, the latter being particularly agile and sporty despite the semi-raised saloon layout. And finally, the owner’s quarters in the interior layout, with a large area of the foreship entirely dedicated to the owner with no design constraints in terms of shape or structure, allowing the space to be customised and to make each yacht one of a kind.