In a powerful display of sailing, in which sustained speeds of at least 20 knots have been reached in the breezy Strait of Bonifacio, the foil-assisted Baltic 142 Canova has recently been enjoying virtually fault-free fine-tuning as her owner and crew put the yacht through her paces in an intense sailing programme.

In a wide variety of wind conditions, the crew and representatives from North Sails, Baltic Yachts and Canova’s rig builder Rondal have been assessing sailplan options and checking rig loadings in conjunction with the use of the yacht’s Dynamic Stability System athwartships sliding foil, which can be seen deployed in some of the accompanying pictures.

Canova was conceived as a global cruising yacht designed to carry her owner and crew at speed and in exceptional comfort for long periods of independent sailing. One of the great advantages of her DSS foil is that it reduces heel and motion making this yacht arguably the most comfortable cruising yacht of her type in the world.

Guests can enjoy a spectacular inside/outside living area using the 40ft (12.3m) long, same level combined deck saloon and main cockpit, covered by a hardtop bimini with touch button sliding side windows for extra protection. One deck below, the owner’s 27ft (7.5m) wide amidships suite, equipped with everything from a gimballed double bed to a treadmill is located where there is most space and least motion.

The yacht’s green credentials are impressive, too. Her electric propulsion system is exceptionally quiet, environmentally friendly and has the ability to charge the yacht’s large battery bank without having to use a fossil fuel burning engine. 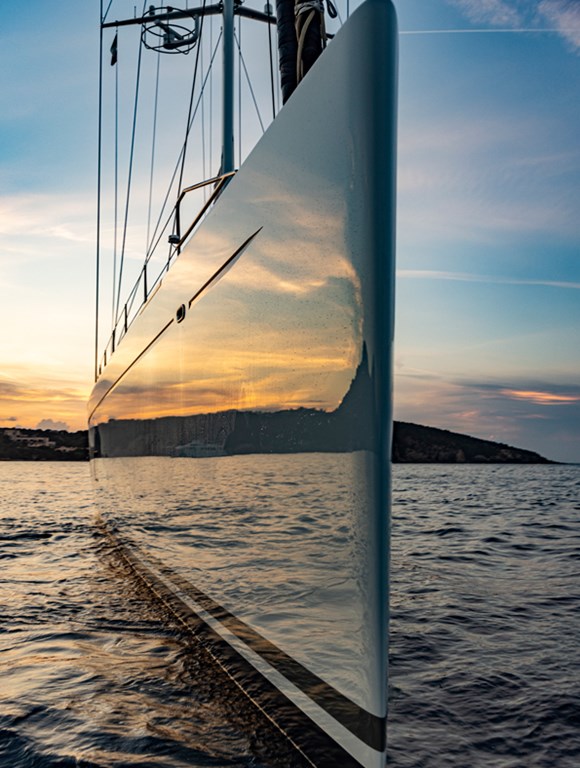 Extraordinarily comfortable
Baltic Yachts’ executive vice president Henry Hawkins, who was aboard Canova in Sardinia recently, said: “The boat has been sailing in 30 knots plus out of Porto Cervo and we are all delighted with her performance. With her twin rudders she is as light as a feather on the helm and she’s extraordinarily comfortable even at speeds in excess of 20 knots.”

“We are also very pleased indeed that there have been virtually no problems as the yacht has been put through her paces in testing conditions,” said Henry Hawkins. “It’s testament to the teams who planned, designed and built Canova. I am extremely pleased with the result – she is a truly remarkable yacht.” he added.

Owner input
Canova’s experienced owner, whose input into the yacht’s design and build has been considerable from the outset, has been sailing intensively since the easing of COVID-19 pandemic restrictions. He’s had time to use the yacht’s DSS foil to good effect and with the 9m sliding appendage extended to leeward, pitching motion is dramatically reduced and the reduction in heel angle has far exceeded expectations, improving all-round comfort. 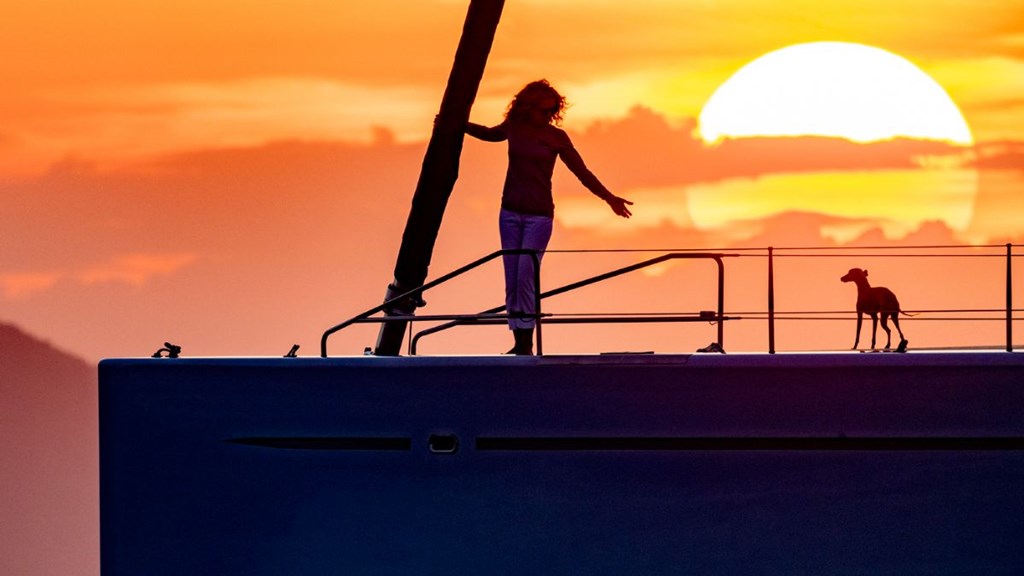 Foil performs a safety role
Henry Hawkins reported that Canova’s owner was particularly impressed with the behaviour of the yacht in fresh conditions when reefing. “With the main de-powered as the reef is put in there’s always the danger of the boom being a problem with everything bouncing about, but with the foil deployed there’s extra stability and much less motion which is a terrific safety factor in these conditions,” he explained.

Canova’s owner and crew have also been getting used to the powerful sailplan. A square top mainsail is set on a carbon spar which can be adjusted by two sets of deflectors, or running check-stays, and masthead backstays. At full hoist, all three have to be eased and then re-set, to allow the square top main to move across during a tack or gybe, but with one reef in, only the lower deflectors have to be eased. With two reefs in, the mainsail headboard is below the lower deflector allowing the yacht to be tacked or gybed with no need to attend to deflectors or backstays.

Easy to handle under sail
“The intention has always been to sail normally with one reef in for cruising and with this reduced main and a self-tacking staysail set she is very easy indeed to handle,” said Henry Hawkins.

The crew have also been assessing the unusual quadrilateral headsail with its dual sheeting arrangement offering a multitude of trimming options. It’s currently designed to be used in a maximum of 21 knots of apparent wind, but there’s a feeling it could be very effective at higher wind speeds.

With Mattia Belleri of Fluid Sailing skippering the yacht, in effect a continuation of his role as project manager during the yacht’s design and build, the owner and crew have been enjoying the benefits of the Canova’s outstanding Lucio Micheletti-styled accommodation.

With the single level deck saloon and guest cockpit forming the focal point of the accommodation, guests spend much of their time in this unusually large area, protected by the cockpit’s long, hardtop bimini. A useful feature in the heat of a Mediterranean summer has been the automatic tinting of the deck saloon glazing, controlled from an iPad. This keeps the accommodation cool, reduces air conditioning energy and works well with the slide-down window panels in the guest cockpit area.

Because the yacht’s electric propulsion system needs less space than a conventional engine and can be arranged more efficiently, it has provided opportunities in the accommodation layout.  The owner’s suite can now be located amidships where there is maximum beam and least motion, providing a huge 700ft² of luxurious living space. Although it is adjacent to the engine room and directly over the DSS foil mechanism, noise levels are minimal due to the acoustic qualities of the electric motor and the advanced engineering of the foil mechanism.

The suite comprises a double bunk to starboard, a lounge area to port, a bathroom with his and hers sinks, plus a carbon fibre bath tub. There’s a separate, full length walk-in wardrobe and an additional head, shower and wash basin to port.

Even though the headroom throughout is more than 6ft 6in (2m), there is space for a treadmill, installed beneath the lounge area cabin sole, and a gimballing mechanism for the double bed.

Hydrogeneration exceeds expectations
The yacht’s diesel electric power plant and hydro-generation system have also exceeded expectations with the main propulsion Danfoss motor generating up to 33kW when driven by the yacht’s propeller when sailing. “Its efficiency is such that we are having to make a few adjustments to the electric motor’s water-cooling system when it’s operating as a generator,” said Henry Hawkins.

Another success has been the effectiveness of the Saildrive Propulsion System (SPS) comprising a leg which rotates through 340° negating the need for a separate stern thruster. In conjunction with the powerful bow thruster Canova’s close quarters manoeuvring can be controlled precisely at low speeds in all wind conditions. Mattia Belleri reports that she is an unusually easy yacht to handle.

Global adventure
With the end of the summer season in the Mediterranean in sight Canova’s owner is planning the next stage of a global adventure which will entail either a transatlantic crossing this winter or a passage to the south Atlantic. 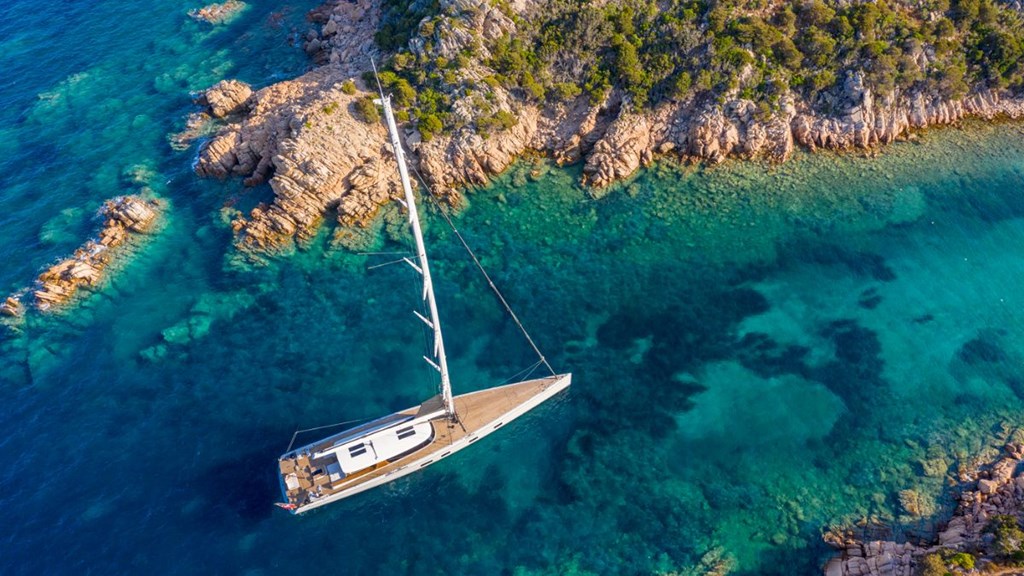